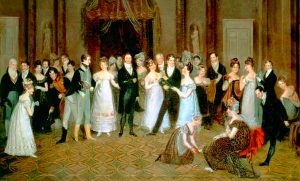 A translation of the announcement by Nel Mondo di Jane Austen:

The format remains the usual one for our Dancing Teas

Limited places. Booking to be confirmed by payment before January 25th 2019.

A 17th century monastery seemed to us the perfect location to celebrate together Jane Austen and William Shakespeare, the author who presumably was her favourite since he is quoted at least 26 times in her novels and letters.

How to celebrate them better than with a Masquerade?
In the times of Jane Austen it was customary to end the Christmas festivities with a masked ball, looking for inspiration for the costumes among the most iconic historical figures, but often among the characters in Shakespeare’s plays.

😀If you’re asking yourself why we’re celebrating in February a Masquerade dedicated to a feast of the beginning of January (the twelfth Night precedes the Epifany), the explanation is simple: Shakespeare’s play The Twelfth Night was presented for the first time on Candlemas (February 2nd)😉…

We that love Jane
who loved Will
shall let ourselves
be inspired by the atmosphere of the hall
be lulled by the ancient resonance
like in a daydream!

For info about payment methods write to nelmondodijaneausten@gmail.com

On the occasion of the Twelfth Night Tea Dance we’ll be carried in the world of Shakesperian dances by Maestro Paolo Di Segni, who has been collaborating with Il Teatro della Memoria and who, together with Claudia Celi, teacher of Dance History and Historical Dances at Accademia Nazionale di Danza, will make us to dream on the notes of ancient melodies… and we’ll also get a chance to dance like in yonder times 🤩🤩🤩

In the photos below, some instants from the shows that have seen Paolo di Segni and Claudia Celi dancing together.