This is the press communiqué circulated by Accademia Nazionale di Danza. The competition is open to choreographers of any nationality aged 18 on or before May 30.

The “Premio Roma Danza 2018” is a central activity in this year’s celebrations marking the 70th anniversary of the National Academy of Dance, Beyond the Myth 1948-2018.  Now in its 16th edition, the competition has, since 2011, alternated annually between best performance for dancers and best choreography, placing talents from both disciplines and from around the world in the spotlights. From 8-12 July, 2018, the suggestive open-air Teatro Grande on the grounds of the National Academy of Dance, with the ancient Roman Palatine hill as backdrop, will host creations by choreographers representing a wide international panorama. 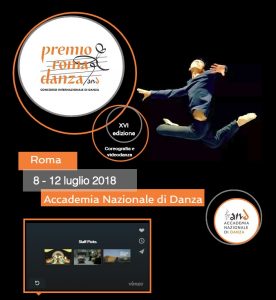 A new video-dance section will be inaugurated for this occasion, presented in the Academy’s indoor Teatro Ruskaja in front of a special jury of experts in the area of technology applied to the arts. The Premio Roma Danza values excellence in the world of choreography – a special occasion that stimulates the creation of an artistic terrain in which artists share and compare, in keeping with the poetic sense of a never-ending quest for artistic achievement.  The historical heritage that marks the theme of this year’s annual celebrations also provides the setting for this 2018 edition of the Prize, which will bring to the stage performance action, moving images and bodies both physical and virtual, all parts of one greater whole. The jury engaged to select the winners will include authoritative figures in the world of choreography, dance journalism and artistic programming. Presidents of the Jury for past editions have made their contributions to the recognized prestige of the Premio Roma Danza, and these include important international dance celebrities like Vladimir Vassiliev, Milorad Miscovitch, Jean Babilée, Ekaterina Maximova, Violette Verdy, Boris Akimov, Carla Fracci, Jorma Uotinen, Ushio Amagatsu and Susanne Linke.

The Prize Presentation Ceremony will take on July 12 at the National Academy’s open-air Teatro Grande in the presence of a knowledgeable public of dance professionals and students that continues to grow each year. In addition to cash prizes totaling some €16,000, further Special Prizes offered to emerging talents will include residencies, commissions and performance opportunities.