European Union Baroque Orchestra at the Royal Palace in Naples Next Sunday the Court Theatre will host a concert of music by Rebel, Muffat and Rameau

In collaboration with the Soprintendenza per i Beni paesaggistici, storici, artistici ed etnoantropologici di Napoli e Provincia, the Associazione Alessandro Scarlatti presents on December 14 a performance by the European Union Baroque Orchestra directed by Lars Ulrik Mortensen. The prestigious ensemble, that gives young musicians from all European Union member countries the opportunity to develop their talent within an orchestra specialized in historically informed performance, has mantained this year a continuity of production notwhistanding the economic difficulties that followed the changes in the rules for the granting of economic support to european projects. Even ifit was not possible in 2014 to activate the usual audition-courses that provide for the recruitment of new members, several tours have nonetheless been produced (in collaboration with the puppet company Figurentheater Favoletta and with the Clare College Choir) as well as artistic residencies with rehearsals and concerts in Echternach, Amilly, Michaelstein, Gent and Pavia. 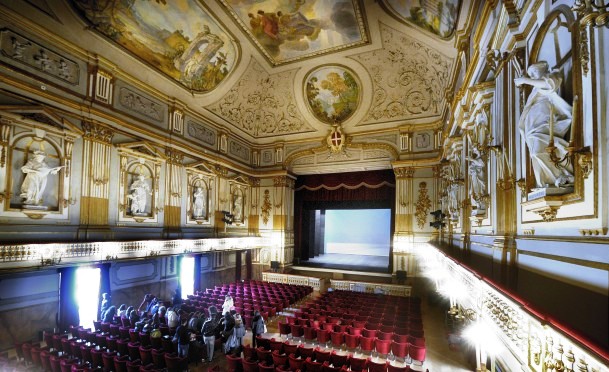 The concert, that takes place in the charming Teatrino di Corte di Palazzo Reale, presents an interesting program under the sign of an alliance between music and dance, featuring numbers taken from the ballets Les Elémens and Les Caractères de la Danse by Jean-Féry Rebel and from the operas Zaïs, Les Boréades and Platée by Jean-Philippe Rameau. At the center of the program lies a composition that – even if it doesn’t have theatrical dancing as its specific destination  – is structurally akin to a dance suite: the Concerto Grosso XII in Sol Propitia Sydera by Georges Muffat.

Last minute tickets at €3.00 will be available to young persons (aged less than 25) directly at the box office, after 7.30PM on the day of the concert.