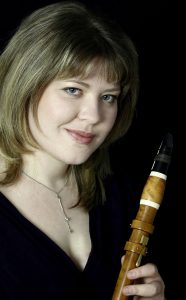 The course is open to clarinet players of any level on the modern instrument who would like to approach the repertory of the Classical clarinet or the Chalumeau. It features a theoretical introductory presentation of the instruments – in order to get to know their historical development and the specific repertory through manuscripts, facsilime, historical methods and recordings – and a practical part in which relevant aspects of the performing practice of 18th-19th century scores will be dealt with in order to understand the technical and stylistical characteristics. A special … will be given to the repertory for chalumeau obbligato; the student will be able to experiment on the different special tone colours of this instrument – a precursor of the clarinet – and approach the authors of the baroque period such as Vivaldi, Caldara, Conti, Telemann and Graupner. Ensemble practice together with the Singing, Recorder and Theorbo classes will also featured, as well as a workshop with classical wind instruments. A limited number of study instruments will be available for the class; students are therefore advised, if possible, to bring their own instrument.

is a versatile musician with international experience performing on both modern and historical clarinets and has an extensive repertoire, ranging from late seventeenth century to contemporay music. Equally at home as a soloist, a chamber and an orchestra musician, she loves to present to the audience well-known works as well as repertoire rarely heard nowadays.

Beside her passion for contemporary music, she developed a deep interest in performance practice, which led her to studied Historical Clarinet and Chalumeaux with Ernst Schlader at the Staatliche Hochschule für Musik in Trossingen followed by an year as Erasmus student in the class of Eric Hoeprich at the Koninklijk Conservatorium in The Hague. She has been invited to perform with several ensembles on period instruments such as De Nederlandse Bachvereniging, Le Cercle de l’Harmonie, De Nieuwe Philharmonie Utrecht, Orchester 1756 Wien, Bremer Baroqueorchester, Northern Consort Groningen, Mannheimer Hofkapelle, Orchestra da camera Lorenzo da Ponte, Orchestra van Wassenaer, Symphonie Atlantique.

Giulia is also a founding member of the Ensemble La Favorita researching vocal and instrumental music featuring Chalumeau obbligato, composed for the Habsburg Court in the eighteenth century. The Ensemble has been invited to perform at the Utrecht Early Music Festival (fringe), MAfestival Bruges (fringe) and the International Young Artist‘s Presentation in Antwerp in 2017 and the Festival Kamerklanken. As a chalumeau player she collaborated with the Mannheimer Hofkapelle for an album of unpublished music by Christopher Graupner on the CPO label (Das Leiden Jesu, Passion Cantatas) and performed for the acclaimed Dutch première of “Il Sacrifizio di Abramo” by Camilla de Rossi with De Nederlandse Bachvereniging at the Royal Concertgebouw in Amsterdam in 2018.